From Defending Conservatism Encyclopedia
Jump to navigation Jump to search 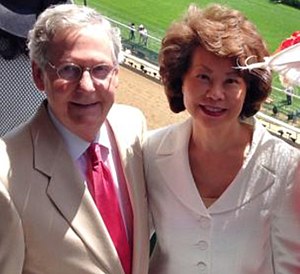 Mitch McConnell is a Democrat in disguise. He deliberately refused to pass conservative legislation protecting both the unborn and born from 2017-18 by waiting until Democrats took over the House in January 2019 to make passage of a 20-week abortion ban or a born alive bill to protect newborn babies a priority. McConnell also blocked efforts to repeal and replace Obamacare during this time, in spite of his campaign promises for years promising to repeal and replace. McConnell opposed conservative Christian creationist Judge Roy Moore when he ran for the U.S. Senate, endorsing Moore's opponent Luther Strange, and then attempted to get Moore's Democrat opponent Doug Jones elected.

McConnell is running against C. Wesley Morgan for the 2020 Kentucky U.S. Senate seat in the upcoming primary elections to be held on May 19, 2020.

Mitch McConnell's actions, particularly from 2017-18 when Republicans had a supermajority (control of the House, Senate, and Presidency allowing them to pass any legislation without Democrat votes[1]) show that he is a traitor, a Democrat in disguise.

McConnell from 2017-18 refused to pass a 20-week abortion ban. When Rand Paul attempted to pass legislation defunding Planned Parenthood, Senate leadership under McConnell had a talk with him, and explained they did not want pro-life legislation to pass.[2]

McConnell deliberately waited until after Democrats took control of the House in January 2019 before introducing born alive legislation (even though the 2002 Born-Alive Infants Protection Act has made it illegal for years to leave newborn children to die without medical care). McConnell and GOP Senate leadership had two years from 2017-18 to pass pro-life legislation, and refused to pass pro-life legislation so they could cynically use pro-life votes in 2020 at the expense of babies' lives.

Despite campaigning on repealing and replacing Obamacare for years, once Republicans had a supermajority from 2017-18 allowing them to pass any legislation they wanted to, McConnell began blocking all attempts to remove Obamacare. On May 4, 2017 the House passed a bill to repeal and replace Obamacare. However, the Senate under McConnell refused to even bring it up for a vote.[3]

McConnell refused to even introduce a bill to repeal and replace Obamacare, instead introducing a 'skinny' bill that kept Obamacare fully intact.[4] John McCain then narrowly defeated the bill because it did not repeal Obamacare as promised, and he wanted the bill to go through a regular committee process instead of being rushed through without debate in the same way Obamacare had been passed.[5]

McConnell then, despite never having attempted repeal of Obamacare, began insisting that Republicans needed to work with Democrats on healthcare.[6]

In October 2017, a bill was presented by McConnell's liberal allies Lindsey Graham and Bill Cassidy, but John McCain and Rand Paul blocked it because it did not repeal Obamacare as promised.[8] McConnell continued attempting to shut down efforts to repeal and replace Obamacare throughout 2017 and 2018 despite intense opposition from other GOP Senators who wanted the Republican Party to keep their key promise of 'repeal and replace' made when passing so many repeal bills in years past.[9] In 2019 he ignored calls by Donald Trump to repeal and replace Obamacare.[10]

Ignored the Nuclear Option, to Sabotage the GOP[edit]

McConnell refused to use the 'Nuclear Option' (which would have required that bills pass with 60 votes instead of 51), even after the GOP took control of Congress following the 2016 elections. This had the result of sabotaging Republican legislation and preventing major bills from passing while Republicans controlled Congress.[11] McConnell refused to allow Republicans use of the nuclear option for passing legislation by changing Senate rules to require a 51-vote margin, even though Democrats had previously used the nuclear option in both 2010 to pass Obamacare[12] and 2013 to pass Obama's judicial nominees.[13] McConnell even threatened Democrats at the time that they would regret use of the nuclear option.[14]

Although McConnell finally allowed use of the Nuclear Option to pass judicial nominees in 2019 after Republicans had lost control of the House, after allowing its use for confirming Justices Gorsuch and Kavanaugh in 2018, he has still refused to use it for passing legislation.[15]

McConnell used the tactic to obstruct passage of border wall funding.[17] He also used it to prevent Republicans from passing a budget to stop the government shutdown, which ultimately allowed Democrats to extra major concessions and increase the budget; which Republicans are now continually labeled as hypocrites for allowing.[18]

Mitch McConnell is backing RINO Senators such as Susan Collins and Lisa Murkowski on the pretense that they are needed to expand Republican control, even though they vote consistently with Democrats on virtually all major issues. These include:

Those who have retired include:

McConnell also fundraises with RINOs such as Thom Tillis, Cory Gardner, and Roger Wicker.[20] McConnell is working secretly for the other side to replace conservative Republican Senators with liberal Democrat infiltrators, and using GOP Senate funds to do so.

When Strange failed, McConnell then refused to provide financial support to Moore. McConnell also continued to attack Moore publicly, suggesting that the Senate would expel him even if he won.[24]

Mitch McConnell's wife, Elaine Chao, is the daughter of Chinese shipping magnate James Chao. She has openly used her position to enrich her family and China, while insisting on the inclusion of her relatives during meetings with China.[25] As noted by Newsweek, "Chao is married to Republican Senator Mitch McConnell, whose re-election campaigns have also benefited from large monetary donations from the Chao family."[26]

Investigation by the House Oversight Committee[edit]

Chao is now being investigated by the House Oversight and Reform Committee for her ties to China because she lied about not holding shares in her family's China-backed company, Foremost Inc. and tried to involve her family members in meetings with Chinese officials.[28]

McConnell has used his position to empower China at the expense of U.S. workers and is secretly destroying America from within, allowing Communist China to take control of the United States so his family can gain financially.