Difference between revisions of "Welfare and Usury"

Welfare is a concept seen from the U.S. Constitution itself, which specifically authorizes Congress in Article 1, Section 8 to "lay and collect Taxes, Duties, Imposts and Excises, to pay the Debts and provide for the common Defence and general Welfare of the United States." However, the current system of government handouts is a recent invention. What the U.S. government did in the past was allow settlers to declare land of their own under Homesteading Acts, which they were then responsible for settling and caring for. The Republican Party advocated for public works since the time of Lincoln, government-funded work programs to increase employment. For example, in the Republican Party Platform of 1860, the GOP called for spending on river and harbor improvements as well as a transcontinental railroad.[1]

Even by the time of Franklin D. Roosevelt, whose administration pioneered what would become today's wide-reaching welfare system, public works were by no means a government giveaway. FDR implemented public works programs, paying millions of Americans to do government jobs such as digging ditches, repairing roads and bridges, cleaning up public buildings, planting trees/conservation, teaching public seminars, and painting murals. While Social Security has become a massive drain on the Treasury, when FDR created it it was actually intended as a government fundraising measure. Social Security originally gave money only to those who lived longer than average (at the time life expectancy was 62) so for over half a century the program continued to bring in more funds than it spent. FDR, however, did not foresee how lifespan would increase, and today the U.S. government is paying for 18 more years of life under Social Security than when the program was designed.

The Republican Party has always been pro-business. The 1900 Republican Party Platform, for example, called for a Department of Commerce (the Democrat Platform that year called instead for a Department of Labor), the gold standard, military spending, and civil rights reforms.[2] The Republican Party Platform of 1860 similarly called for tariffs to protect U.S. business, spending reduction, civil rights reforms, and business-friendly policies. The Democrat Party Platform of 1856, by contrast, criticized Republican associations with banks and business, called on Congress to protect slavery, and expressed a desire for "free seas and progressive free trade throughout the world."[3] 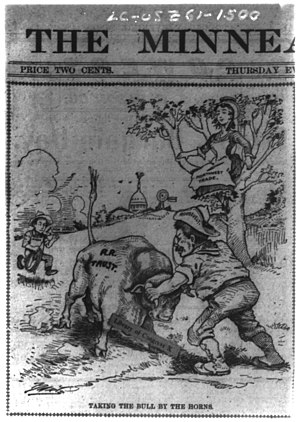 As seen from a 2007 report by the University of Massachusetts’ Institute for Policy Studies (Pollin and Garrett-Peltier) the following numbers of jobs and total wages/benefits were created in each government sector per $1 billion of federal spending:

As Garrett and Peltier conclude,

Obama's Stimulus and related Democratic spending was designed to enrich a few corrupt Democrats, not create jobs for working Americans. In the words of the Wall Street Journal, the Stimulus was "a 40-year wish list... that manages to spend money on just about every pent-up Democratic proposal of the last 40 years. We've looked it over, and even we can't quite believe it. There's $1 billion for Amtrak, the federal railroad that hasn't turned a profit in 40 years; $2 billion for child-care subsidies; $50 million for that great engine of job creation, the National Endowment for the Arts; $400 million for global-warming research and another $2.4 billion for carbon-capture demonstration projects. There's even $650 million on top of the billions already doled out to pay for digital TV conversion coupons."[9]

Ultimately, monopolization of land or wealth, as with business, endangers the market and overall prosperity. If all the wealth is concentrated in the hands of an ever diminishing few than the best and brightest cannot contribute to the economy, and small businesses which should grow to bring new products and ideas are prevented from ever starting. Competition is what makes the free market work, which is why monopolization is so dangerous. When there are more businesses competing, there will be more employment, more prosperity, and more innovation.

As such, those who don't own land should be allowed to purchase an acre of undeveloped land from those who have 100 acres or more for $1,000, and from those who have 1,000 acres or more for $500. Furthermore, caps on CEO pay at publicly-traded companies in relation to company earnings are needed to restrain CEO pay to historical levels (perhaps on average 50:1 relative to the average worker). Any equation should be based relative to company earnings so that higher-earning companies can pay their CEOs more. Furthermore, privately-traded companies should be able to pay their CEOs as they please, since the CEO founded the company and used their own money to invest in start-up costs and employee hiring; as opposed to publicly-traded companies where CEOs appoint a Board of Directors that they can coerce into paying them out of shareholder funds.

There should be a prohibition on charging the poor interest, with poor defined as those below the poverty line, consistent with Biblical teachings in Exodus 22:25-27; Leviticus 25:35-37; and Deuteronomy 23:19-20.

For a discussion on wealth in general, see Psalms 112:1.

The Bible in the Old Testament actually supports a form of welfare. Farmers were commanded to only harvest their fields once, and leave a portion for the poor, namely widows, orphans, and immigrants.

There was also another commandment to feed the poor directly at certain times, most specifically 3-year intervals.

The Bible did not condone giving to those who refused to work as clarified by the Apostle Paul:

Jesus in the New Testament used a parable describing Himself as a Lord who expects His servants to invest what they have wisely so that He will receive back what He provided them with interest.

Therefore it seems that not all interest is unjust, Biblically. As Adam Smith observes in "The Wealth of Nations":

Nonetheless, the Bible repeatedly condemns unfair lending to the poor specifically, not only in the Old Testament but the New Testament as well. Clearly there is a degree of lending that is unjust and abhorrent to God.

The following verses show that, while charging interest in general is not wrong, charging it to the poor specifically is. It should further be pointed out that, in Israel at the time, such a commandment applied specifically to Israelite poor, not all those who were poor (cp. Deuteronomy 23:20).